Fed Admitted Ignorance, Underplayed Severity Of Situation Just Ahead Of Massive Crisis, New Docs Reveal
01/18/2013
"If you want to feel confident that the Federal Reserve knows where it's going as it steers the world's biggest economy, then you probably should not read the transcripts of its 2007 policy meetings.
Those transcripts, released on Friday, show a Fed groping blindly for answers about the early market tremors preceding the financial crisis, while also blithely deciding that everything was probably going to be just fine.
In what may be the most glaring example of the Fed's forecasting failure, its economists declared at the December 2007 policy meeting that the U.S. would avoid a recession, despite a slowdown in housing and turmoil in financial markets that was getting worse all the time. As we now know, the worst recession since the Great Depression began that very same month, according to the National Bureau of Economic Research. In less than a year, the financial system would be on the brink of total collapse.
The Fed didn't see it coming."
Posted by Scott at 3:32 PM 2 comments:

Techno-pessimism: When will the good times return? | The Economist

Tyler Cowen's notable e-book "The Great Stagnation" is a key piece of this literature, but the position has been reinvigorated thanks to a new paper by Robert Gordon. Mr Gordon's take on stagnation is considerably more pessimistic and forward-looking than Mr Cowen's; not only is an innovative slowdown responsible for slowing progress pre-crisis, he argues, but this trend will continue as the benefits from humanity's "one big wave" of innovation peter out amid demographic and fiscal headwinds.
...It seems clear that productivity growth dropped sharply in the early 1970s relative to the earlier industrial era. At least part of that slowdown is probably due to the exhaustion of benefits from the great innovations of the past—electrification, internal combustion engines, petrochemicals, and the "early IT" of radio and telephones among them. Discovery didn't stop, of course, but the locus of innovation—computing and information technology—was simply too small a part of the overall economy to have a big effect on growth, incomes, and welfare.
By the mid-1990s, that was no longer the case. The computing age began to show up in the productivity statistics in a big way. This occurred, first, in the technology sector itself as America captured huge gains from production of chips, computers, and similar technology. By...2005, however, something seemed to go wrong. Productivity in manufacturing slipped a bit and dropped substantially for the economy as a whole. The 2000s were also a trying period in terms of employment and wage growth. This has led some thinkers, including Mr Gordon, to conclude that the boost from IT has run its course.

Here's an exponential trend looking for a breakdown: 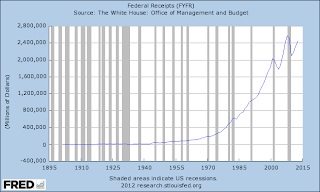 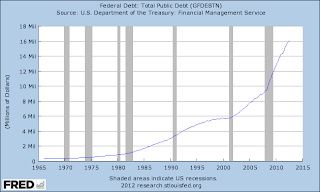 US employment by age group

Note that the 55+ workforce has been steadily increasing while the 25-54 workforce has declined. Also, the 20-24 workforce has stayed roughly constant, so it appears that college age workers aren't really avoiding the job market by staying in college for additional degrees. 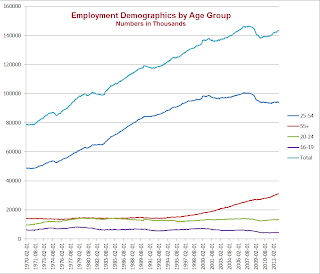 Source
Posted by Scott at 1:30 PM No comments: 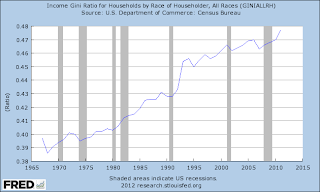 based on the above chart of the GINI ratio; in fact it has spiked upward since the major recession.